With cooler weather on the way we get hungry for dishes that are hearty and warm. And shepherd’s pie can sure hit the spot.

The British are known to put almost anything in a pie. To “pie” means to “jumble together”, and shepherd’s pie is just that. The dish is believed to have been developed in Scotland or northern England and was probably brought to the Pacific Northwest by settlers in British Columbia and Oregon.

I love the presentation photo on Chez Us Blog for their Greek Shepard’s Pie in Individual Servings and the Eggplant in the recipe sounds D’Lish!

Originated as a meal for Shepherd’s using the ingredients they could get easily (sheep and potatoes) – today it’s typically a mixture of leftover cooked lamb or beef, gravy and vegetables –placed in a casserole or deep pie dish, then topped with whipped potatoes and baked until golden. It’s a great dish to get creative with.

There are vegetarian versions, venison versions, some swanky restaurants even serve lobster pot pie. It can basically be made with almost anything ….and is perfect for using up leftovers.

My favorite Shepherd’s Pie recipe combines both lamb and beef, and has red wine and rosemary added to the filling, and then topped with Chevre & Chive Mashed Potatoes. Now that’s a hearty fall d’lish dish! -Kathy

First, prepare the Chèvre & Chive Mashed Potatoes, and set aside. Preheat an oven to 400°F.

Heat the oil in a large skillet over medium-high heat and sauté the onion, carrots, turnip, and leek for about 4 to 6 minutes, or until tender. Remove with a slotted spoon and set aside.

To the same pan, add the meat and break up with a spoon. Cook the meat for about 5 minutes, or until browned. Carefully drain off any excess fat and return the pan to the heat. Stir in the rosemary, wine, tomato paste, salt, and pepper and scrape up the browned bits on the bottom of the pan as you bring the mixture to a boil.

Meanwhile, whisk the cornstarch into the stock and stir this mixture into the boiling meat mixture. Stirring constantly, cook for about 1 minute to thicken. Taste and adjust the seasoning as needed.

Transfer the mixture to a 9-by-13-inch baking dish. Spoon the mashed potatoes on top, covering the meat mixture evenly and making the top peaky-pretty. Bake for about 25 to 30 minutes, or until the mixture is bubbling and the top is lightly golden.

Put the potatoes in a very large pot and cover with water by at least 3 inches. Add a big pinch of salt. Bring to a boil, then reduce the heat and cook on a low boil until fork-tender, about 20 to 30 minutes. Test the potatoes to be sure they’re tender all the way through.

Meanwhile, heat the milk and butter in a small saucepan over low heat until the butter is melted, and the milk is warm. Do not boil. Keep warm.

When the potatoes are cooked, quickly drain them well in a large colander, then return them to the pot. Shake the pot over low heat for about 30 seconds to dry out any remaining water. Remove from the heat and add the milk mixture. (Both the potatoes and the liquid must be hot.) With a heavy-duty whisk or masher, mash the potatoes. Then add 1 tsp. of salt, the white pepper, and cheese, and whip or mash the potatoes until they are fluffy. Mix in the chives and cover the potatoes to keep warm.

Labor Day is coming up – a holiday that commemorates the workers who have made this country great. For many people, it also heralds the end of summer and the last 3-day weekend before school starts. So why not enjoy the last blast of summer with a great picnic and...

A Vegetable Mash Up

What’s old is new again – what with the uber popularity of Kale, Brussel Sprouts and Rutabagas.  In years past, Moms could not bribe the kids to eat these veggies. A good example of an old but new veggie, is the gorgeous Lacinato Kale ---- so beloved in Italy in slow... 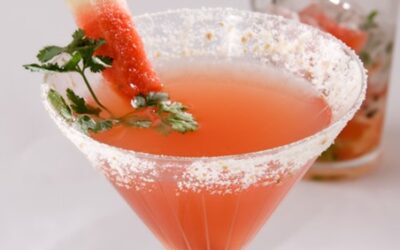 A few Summers ago, I whipped up a party-size batch of Watermelon Sangria. It was a hit and, really, just plain made my croquet game even better! Some may think that melons have a hard time growing in our rainy climate, but thanks to irrigation in the drier and hotter...

Want to keep up with Kathy Casey? Sign up to our newsletter and never miss an update.